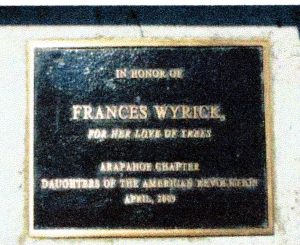 In 2011, the City of Boulder Forestry Department placed a plaque at the foot of the Christensen Park bench in honor of Chapter Regent Frances Wyrick because she had been the force behind the completion of filling (tree planting) the park to capacity.

Engine #30 was returned to Boulder on a standard gauge flatcar. Dr. John B. School, his committee, and numerous volunteers contributed to the restoration and preservation of the locomotive. The bronze plaque, furnished by the Arapahoe Chapter, was mounted on a block of hard Eldora granite which was furnished and placed by the Boulder County commissioners.

Engine #30 Plaque is mounted on a granite monument. The large rock in Central Park in Boulder at Broadway and Canyon Streets that marks Boulder County’s narrow gauge railroad when Old Engine 30 was placed on display in Central Park remains in place. The engine itself is undergoing renovation now.

The inscription reads:
(state insignia)
This tablet is the property of the state of Colorado old Engine No. 30 operated over the narrow gauge railroad (opened in 1883) affectionately known as “the Switzerland Trail of America” between Boulder, Eldora and Ward 1898-1919 and over the Denver and South Park and Rio Grande Southern until 1952.

The memorial to the Colorado Railroad and Mining Pioneers Erected by the State Historical Society of Colorado from the WM A. Braiden Fund and by Arapahoe Chapter of the D. A. R. 1952.

It is a bronze plaque mounted on the pedestal at the base of a church bell, located in front of the First Congregational Church on the southwest corner of Broadway and Pine Street in Boulder.

The inscription reads:
(DAR insignia)
This bell was brought overland by ox team in 1869 and hung in the First Congregational Church marked by the Arapahoe Chapter Daughters of the American Revolution 1932

In 1932, Arapahoe Chapter placed its second plaque on the pedestal of the church bell of the First Congregational Church at Broadway and Pine Streets. When the church was rebuilt in 1905, the bell was placed in the yard of the parsonage next door where it remains today. Interesting fact: This bell tolled for the last time on July 4, 1926, at the very moment the Liberty Bell in Philadelphia, Pennsylvania, and bells all across America were sounded to mark the sesquicentennial of America’s independence.

The inscription reads:
On this ground was built the first schoolhouse in Colorado in 1860
Erected by Arapahoe Chapter Daughters of the American Revolution 1917 (insignia)

The school was started by Abner Brown on land donated by Marinus G. Smith. Construction cost was $1,200, raised by subscription. It was a frame building, 24 feet x 36 feet. It was moved from the site and replaced by Central School in 1872. The original building later burned.

The original First School in Colorado Marker was a bronze plaque mounted on a gray granite pillar. The area was redeveloped and the plaque placed on the building where it stands today on a building called the Wespeak Building.

A bronze marker was placed in ground at the base of the tree in May 1926.

The plaque is located at the foot of an oak tree near the west steps of the band shell in Central Park at Broadway and Canyon Streets. It is dedicated to Mrs. Lenna Brainard Derham, Arapahoe Chapter regent from 1914 to 1917. A red oak tree was planted first to mark the site for the plaque to honor Mrs. Derham in May 1926. The first tree died and another was planted in April 1928.

The inscription reads:
(DAR insignia)
Honoring Lt Cmdr Scott Carpenter a native Coloradoan for his earth orbit flight May 24, 1962. Erected by the Arapahoe Chapter Daughters of the American Revolution.

Malcolm Scott Carpenter, one of the original seven astronauts in the NASA Space Exploration program, made the second American orbital flight May 24, 1962, in Mercury-Atlas 7. He was airborne 4 hours 56 minutes and achieved three earth orbits. He then worked on the development of the lunar module and as the executive assistant to the director of the Manned Spacecraft Center.

In 1965, he took a leave of absence from NASA to participate in the Navy’s Man-in-the-Sea Program and spent 30 days living and working on the ocean floor in Sealab 11. He was a leader of two of the three teams that spent a total of 45 days at a depth of over 200 feet.

Later, back with NASA, he was responsible for liaison with the Navy for underwater zero-G training. He injured his elbow in a motorcycle accident in Bermuda and left the astronaut team for good August 10, 1967.

Five black marble markers are part of the memorial. They represent the seals of the five branches of the armed forces. On the reverse side of the markers are inscriptions by people in the community with words of remembrance of a person or a patriotic sentiment like the inscription on the back of the U.S. Army marble marker, placed by Arapahoe Chapter.

The Chapter wanted to honor our 100th Anniversary with a new marker in the community and chose an inscription on a tablet of the new Vietnam Memorial.